Sewing my way to a magical wardrobe 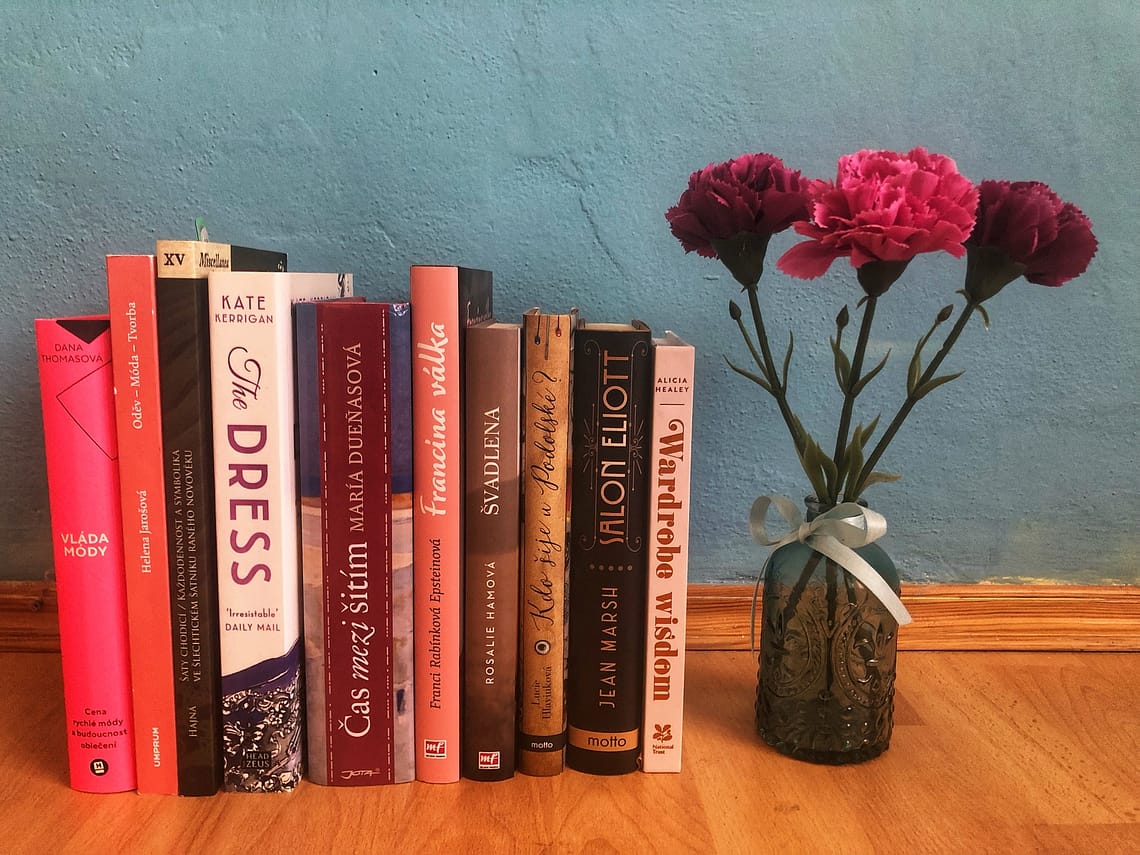 I don’t know about you, but the cold winter weather and the upcoming Christmas festivities just make me want to curl up on the sofa with a nice cup of tea, snuggle under a blanket and sink my teeth into a good book. In this day and age, the choices are endless, so there’s something for everyone, even for us sewists. There are several novels that include sewing in one form or another on my bookshelf, as well as several non-fiction books about the history of fashion, dressmaking, taking care of your clothes, and the fashion industry in general. Perhaps one of these might catch your fancy.

The fate of three women connected by the threads of one couture dress. The story of Lily, a blogger and vintage fashion lover, set in the present in London, is intertwined with the story of Joy, a New York socialite, in the 1950s, who is trying to save her marriage, and with the story of Honor, in Irish immigrant and a talented dressmaker, commissioned to make Joy’s dress which is meant to ensure her husband does not lose interest in her. When Lily discovers a photograph of the dress in the newspaper, she begins to dig into its secrets and decides to remake the dress. Besides being a captivating and interesting story, the novel gives a lot of space to the design process as well as to the making process itself and accentuates the psychological role clothes play in our lives. Don’t expect tutorials for couture techniques, but dressmaking does receive a lot of attention in the novel.

Did you know that dressmaking patterns helped to win the war? It may not be historically accurate, but at least in this novel they did. Sira, the protagonist, a talented dressmaker, flees Madrid after the civil war erupts, and settles in Morocco, where she builds her own fashion house. By accident she gets roped into working for the British secret service and guess what she uses to communicate with them? Secret markings on her dressmaking patterns, which she sends them regularly.

If you are into history, and epic dramatic tales, I heartily recommend this novel, I could not put it down. Dressmaking gets a lot of attention, from the almost romantic beginnings of Sira’s dressmaking journey as she learns how to properly thread the needle at the salon where her mother works, to building her own business in Morocco and the key role of her dressmaking patterns in the world events of the twentieth century. The novel was adapted into a Spanish series (available on Amazon Prime, I think) and the author published a sequel last year.

The House of Eliott, Jean Marsh

As the title suggests, this is a novel about a fashion house – this time, it is a fashion house established by two sisters in London in the 1920s, who are forced to find a way to make a living after the death of their father. So they use the only things they have been left with – they repurpose their father’s old clothes, first to sew for themselves, and then for women from the lower classes. So look no further if you need some inspiration for your refashion projects! Gradually, they make it to the top tiers of the fashion world. Fashion, expensive fabrics, and sparkly beads decorating contemporary fashion represent a means of female emancipation at a time when female independence was not encouraged, especially not among the higher classes, where women were not raised or educated to work. The novel was written based on a BBC TV-series from the 1990s.

After spending 20 years in Europe learning her trade from dressmaking experts such as Madeleine Vionnet, Tilly returns to her Australian smalltown home in the 1950s and introduces its inhabitants to the wonder that is couture fashion. The importance of fashion in the novel in underlined by the names given to the four parts of the book, which are all names of different types of fabric. Nevertheless, beautiful clothes cannot turn the women of the town that are given to prejudice and gossip into ladies, nor can they inspire better manners and bit of self-reflection in them. Even though they commission their clothes from Tilly, they still unjustly persecute her for the death of a boy she allegedly caused aged ten, and for other misfortunes that have happened in the town since her return. Their behaviour thus inspires Tilly to devise a truly unconventional solution to the situation.

In 2015, the novel was turned into a film starring Kate Winslet and the costumes are just exquisite. If you are familiar with Australian literature and cinema, it won’t surprise you that the characters and plot might be a bit bizarre, so it may not be everyone’s cup of tea, but I like it.

A memoir of Franci Rabínek Epstein, a Holocaust survivor. When she was just 18, she took over the family business, a successful fashion house in Prague, but with the passing of more and more anti-Jewish laws the family gradually lost their rights, possessions and eventually their freedom. This is a book less about sewing and more about a personal view of historical events, but it offers a fascinating insight into the horrible world of concentration camps and a subsequent return to post-war Prague through a fresh perspective of a young woman that is free of pathos and drama, and discusses not just the horrors of the war, but the everyday issues with relationships and sexuality that people even in the concentration camps had to dealt with.

There is not much room for sewing, it’s only there in little titbits, such as memories of the systematic and meditative process that it represents for Franci, or as a necessity in absurd situations such as this one: after arriving in one of the concentration camps, the Jews are ordered to relinquish any items of clothing longer than a specified measurement (I cannot remember the exact number). Franci describes how she took her long wool coat and spent the night cutting it to the desired length using her nail scissors, finishing the new hem with the thread she ripped from the original hem. Perhaps save this novel for after Christmas, as it’s sometimes not a very happy read, but I think it’s still worth your attention.

Fashionopolis: The Price of Fast Fashion and the Future of Clothes, Dana Thomas

The journalist Dana Thomas offers an insight into the workings and (lack of) sustainability of the fashion industry based on her experience from visiting factories and conducting interviews, and she ponders how to exit the mad cycle of fast fashion. The book was written before the Covid-19 pandemic which had a huge impact on the fashion industry, so it would be interesting if Thomas revisited the topic.

Alicia Healey worked as a Lady’s Maid at Buckingham Palace and her handy little book offers lots of tips on how to care for your clothes, how to mend them, what to have in your sewing kit, how to pack your clothes properly, how to dress for any occasion imaginable, or what every lady’s capsule wardrobe should include. Even though most of us probably won’t use the advice on how to dress for an audience with the King or for the Royal Ascot, it’s always good to be prepared. Plus Healey also divulges some stories from her life as a Lady’s Maid in the 21st century in one of the most famous monarchies in the world.

This is a book that’s not at all about sewing, but the protagonist Tiffy has a truly eclectic taste and the author lets us get a glimpse of her wardrobe full of colourful clothes, sparkly fabrics, and a whole array of accessories. Plus, Tiffy does own a sewing machine, even if we don’t see her use it. If you’re after some light reading that will warm your heart, look no further than this little tale about a very original form of flat sharing in overpriced London, full of cute post-it notes Tiffy and her flatmate start leaving each other around the flat where they never meet.

Well there you go, I hope you found something interesting on my list. Please let me know if you have any favourite sewing-themed novels or non-fiction books that are not on here!

ME-MADE MAY 2021: Rediscovering your me-made wardrobe

5 things I learned knitting my way through the pandemic: tips for newbie knitters

Hi there! My name is Magda and I’m a sewing enthusiast, linguist, and perpetual daydreamer. This blog is about my journey to a me-made wardrobe. I will also share sewing-related tips and tutorials and spread the love for this magical craft.
You can read more about me here.

[ENG] Remember the first collection of fabrics @at

[ENG] Do you make a special dress for Christmas? I

[ENG] A few weeks ago I felt like making something

[ENG] I promised to share some more photos of the

[ENG] Just in time for the cold weather, I finishe

[ENG] Me: I won’t start any new sewing projects